For very long time I have been creating RAM disk and pointing temp and cache dirs there to improve I/O performance and reduce unnecessary SSD writes. Since Windows 8, changing the cache location of IE (a.k.a. “Temporary Internet Files”) to a RAM disk could result in crashes of Metro (a.k.a. “Modern”) apps, which I didn’t figure out why until recently. The problem is also observable in Windows 10.

A Microsoft forum post discussed troubleshooting the problem of “metro app crashes immediately after opening”. But it’s not the case here.

Here is a list of apps I have found to be affected by the IE cache location:

After starting, the app seems to minimize itself to taskbar, and if you click on it, it tries to load but goes minimized again. It crashes but does not exit. On Windows 10 it crashes and exits after staying in splash screen for a minute or so.

The “appear-to-crash” behavior is the same as Kindle’s. I have been in touch with Latermark’s developer (who is very responsive) since I found the app did not work on my machine, and hopefully its next version will tell you some error instead of “flash exit” when such problem is triggered.

[Update] After knowing the cause, the developer has made a page telling you “something unexpected happened” when this problem is triggered. 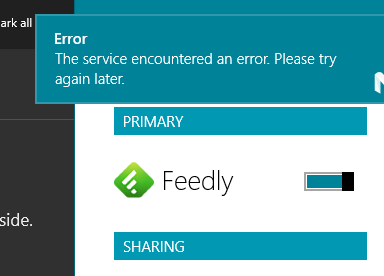 Nextgen Reader works fine until you try to link your accounts, for example, Pocket, to the app. An error toast notification will show up (like the picture above).

If you see some error message from the app Hyper for YouTube like the picture below, it may be caused by you changing the IE cache location.

Windows 8⁄8.1 Modern (“Metro”) apps need to access the IE cache location and they are forced to work under IE’s Enhanced Protection Mode. This requires the IE cache location to be inside a NTFS partition of a disk visible in Disk Management Console (diskmgmt.msc). Not all RAM disk drivers emulate their drives that way.

The dumbest way is to change the IE cache location back to default (%USERPROFILE%\AppData\Local\Microsoft\Windows\Temporary Internet Files).

To keep RAM disk AND have Metro apps work, there are two points to check:

It’s easy to get the first point with most RAM disk software, but few support the second. One free RAM disk software that does so is SoftPerfect RAM Disk. One should choose NTFS filesystem AND enable “hard disk emulation”, although this dramatically reduces the RAM disk’s performance.