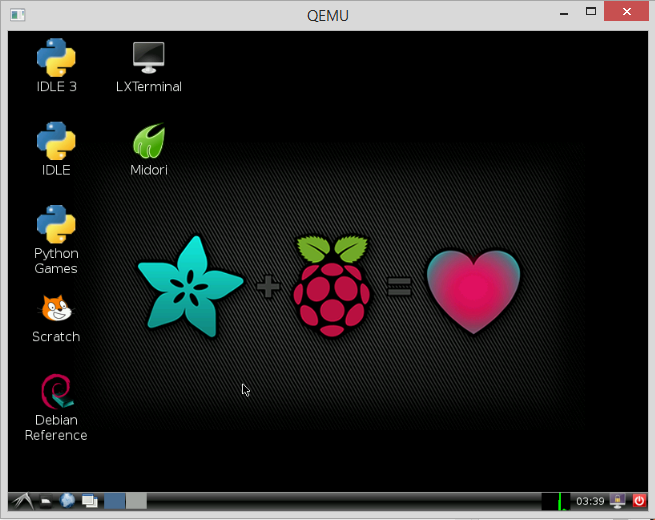 The USB-TTL cable I’m provided with doesn’t support Windows 8.x, which is super inconvenient. So I decided to make a virtual machine running Occidentalis so that I don’t have to work on the real Pi.

Before I made everything from scratch, I did some research and found one article that already discussed emulating RPi on Linux x86-64, and it works. And I even found one packed emulator for Raspbian on Microsoft Windows (Many thanks!)

Update: I have packed my customization to the Raspbian emulator and uploaded the whole stuff to SourceForge. Copyright belongs to whoever creates the original tools and software.

A brief guide if you want to build everything from scratch.

Installing QEMU for your OS.

For Windows, I found this: http://qemu.weilnetz.de/ (owner: Stefan Weil)

For Linux (e.g., Debian or Ubuntu), the following packages are needed, as the article in soslug.org discussed:

Get the system image file

My customizations to the sourceforge project “Raspberry Pi emulation for Windows”:

I forwarded VM port 22 to host port 2222 so that I can ssh into the VM by connecting to localhost:2222 and exchange files easily.

Thankfully again, how to install VNC Server on RPi is discussed in this article: http://elinux.org/RPi_VNC_Server

The emulator already runs faster than the real Pi, but things are still slow, and it seems the Internet connection is not quite stable inside QEMU VM. I don’t know how it goes on other machines.

There have been many updates since the Raspbian or Occidentalis image was released. So one might want to update the system:

And because my course project was to write a simple C compiler on Raspberry Pi using yacc and lex, I also installed the related packages:

I am quite happy with the customizations because the GUI is decent and the system runs faster than the real Pi. But unfortunately the GPIO of RPi cannot be emulated.

An alternative solution to using USB-TTL cable: having your Pi send its IP address to your email when it starts up, and then you ssh into it. Here is an article discussing this approach.